Opening access to geodata: Are we on the verge of an Open Data revolution in extractive industries?

Opening access to geodata as well as simplifying the process of obtaining permits may significantly improve the business climate in Ukraine. It will be much easier for potential investors to objectively evaluate attractiveness of staring an extractive business in Ukraine and its possible scale, otherwise they will choose countries with more advantageous and simpler working environment.

Thus, Ukraine needs not only to comprehend the problem, i.e. access to geodata, but also to engage in active work to at least approach the performance indicators of the leading countries.

Open Data means information that may be freely used and modified by any person for any purposes. The key criteria for such Open Data are openness, accessibility and interoperability, i.e. possibility of interaction among various systems and databases.

Each year, the global trend of disclosure of information in the Open Data format reaches more and more countries, be it private companies or public institutions. Only the EU market size of Open Data-based products and services reached approximately EUR 51 billion in 2016 and, according to the estimates, it will increase up to 64%, i.e. to EUR 83.5 billion in 2020.

At the same time, according to the estimates suggested by the European Commission, the indirect economic impact caused by the usage of Open Data is even greater, i.e. EUR 145 billion in 2016 and by 2020, it will increase to a value of approximately EUR 200 billion.

Meanwhile, Ukraine is only at the outset of this direction with its favourable conditions for the development of the IT industry as well as governmental and public initiatives. In 2015, the legal framework for the Open Data development was put in place and the data.gov.ua portal was launched; then, in 2016, Ukraine joined the Open Data Charter. Therefore, central and local public authorities are already aware of the Open Data; however, they are only beginning to explore new standards of data handling, i.e. collection, structuring and disclosure.

According to the current Ukrainian legislation, access to geodata, i.e. information about subsoil structure, available resources, as well as other qualitative and quantitative parameters and subsoil characteristics, may be provided only for a fee and in a rather uncomfortable way.

The data generated or acquired at the State Budget expense must be stored in the State Scientific and Production Enterprise “State Information Geological Fund of Ukraine” (hereinafter GeoInform) and provided to investors for a fee. In addition, regardless of whether it is primary or secondary (summarised) geodata, the response, whether positive or negative, to an access request may be provided within 10 days.

Most (almost 80%) of these data has not been digitized and cannot be copied with the help of modern techniques. These data can be viewed and processed in the reading room using the XX century techniques. Unfortunately, the Government has not progressed so far in funding relevant works. In fact, GeoInform works on geodata digitizing and publishing in contemporary formats, e.g. geoPDF, at the cost of minor grants and assistance programmes implemented by Norway and Canada. For example, with the support from the Ministry of Foreign Affairs of Norway and the Geological Survey of Norway (NGU) Ukraine has introduced the Mineral Resources of Ukraine tool enabling access to geodata available to a wide range of users including the English-speaking audience. The platform offers online maps with the information about groundwaters, fossil fuels as well as metallic and non-metallic minerals.

Geodata means ad hoc data of significant interest only for investors, extractive companies and public authorities in charge of regulating business activities of the first two. Direct financial advantage of disclosure of such information in the Open Data format is overestimated. Last year, the proceeds of the State Service of Geology and Mineral Resources of Ukraine (Derzhgeonadra) reached UAH 17 million from sales of such data, and according to Mr. Oleh Kyryliuk, the Head of the Service, their current year plan provides for UAH 34 million. For comparison, proceeds received by the Government from extension and issuance of permits for subsoil use reached UAH 433 million in the last year and almost UAH 800 million for the 9 months in 2017, let alone the billions paid to the Budget in the form of taxes and rents.

Currently we are witnessing the shaping of favourable foreign economic conditions for the development of the extractive sector, where short-term and long-term forecasts suggest increasing demand for natural gas both in the EU and in Ukraine. On the other hand, Ukraine’s subsoil has rather large deposits of this resource and increase in its extraction would require only relevant favourable conditions for extractive companies.

Geodata is an aspect to be primarily analysed by investors in order to decide on whether or not to invest in extraction. Hence, availability of open, detail and verified, i.e. high-quality geodata will make this task much easier for investors. Thus, disclosure of geodata in the Open Data format will be an incentive for increase of investments in extraction. Ultimately, this will result in the increase of indirect financial impact, i.e. new jobs, additional revenues to different-level budgets, cheapening of energy resources within the country and, as a result, increased cost effectiveness of products in other industries where the production process directly depends on the cost of energy resources etc.

According to the Government Priority Action Plan until 2020 the Government is supposed to create good business environment and facilitate investments, and in this case to enable familiarisation with geodata and analysing it at any time and without any permits.

“Most legal and regulatory instruments on subsoil use constitute legacy of the USSR era, and making multiple amendments to these documents demonstrates the need for complex reforms of relations in the extractive industry,” says Ostap Semerak, the Minister of Ecology and Natural Resources of Ukraine.

Volodymyr Buchko, Director of the Ministry’s Legal Department, spoke in more detail about the performance of the Ministry of Ecology and Natural Resources of Ukraine in partnership with Derzhgeonadra in this direction during the round table “Investors’ Objectives. Action Plan for Efficient Operation of the Extractive Industry”. According to Mr. Bychko the necessary amendments for regulations have already been elaborated and are pending approval by the end of 2017.

Proposed innovations in the geodata management rules include introduction and continuous operation of an integrated geodata system, web portal, database of secondary (interpreted) geodata and the State Register of Geodata (metadata base). Meanwhile secondary geodata to be generated by the Government must be free and open for potential investors, and in case it is used during issuance of a special permit for subsoil use, it must be included in the relevant fee. Besides, whenever geodata is generated by private entities, information about owners, their contact telephone numbers and addresses will be available in the general register.

How access to geodata is granted in the leading countries?

It’s been long since many countries realized the importance of access to geodata in electronic format, and now they can only boast of their own achievements in that field.

Thus, for example, the Alberta Energy Regulator (AER) developed very efficient single window approach to issuance of any permits for oil and gas field development and provision of any necessary geodata. As a result, any stakeholder may apply for an integral work permit and track its processing online as well. Such system has obvious advantages including avoidance of data processing lags, consolidation of data and processes from several systems in a single integrated solution and the possibility of integrated decision-making.

Furthermore, once the permit is issued, the regulator can control the performance of works within the site during the whole process. In addition, the system reflects different risk levels (if any) peculiar to each oil and gas project. In such case, the regulator may initiate additional inspection or request for additional information. If the online system does not register any high risks, the permit will be issued within 5 minutes. If the system identifies any risks, the maximum processing time for one request will be 1.5–2 months. In comparison, according to the Association of Gas Producers of Ukraine the entire permit process for one oil and gas well will take approximately 42 months. At average, a company intending to launch the field development process will need 44 documents to be issued by 16 different authorities and institutions. 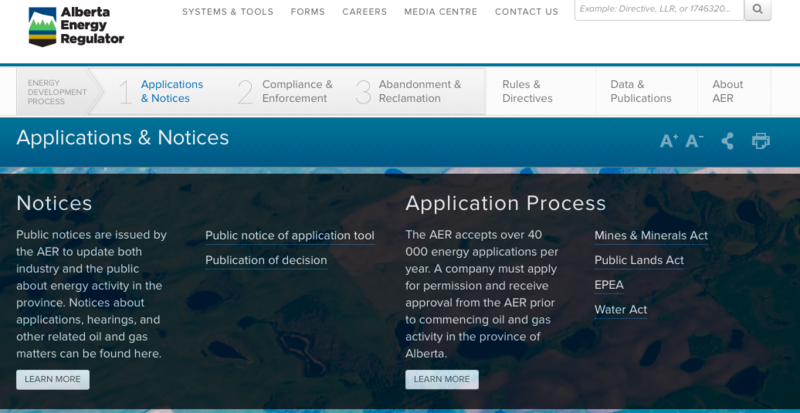 So it’s not a surprise that the Canadian province also received high score according to the Resource Governance Index. In particular, Alberta received 75 points and this means that the country had favourable legal framework and conditions which allowed people to benefit from mineral extraction in their territory. For comparison, Ukraine received only 49 points out of 100 and took the 44th place. Such result cannot be construed as positive. Thus, analysts from the DiXi Group offered the Roadmap indicating the main changes to be made in the energy sector of Ukraine. In particular, the Roadmap also puts emphasis on the need to liberalise the geodata use and disclosure procedures.