In search of the owners of gas networks 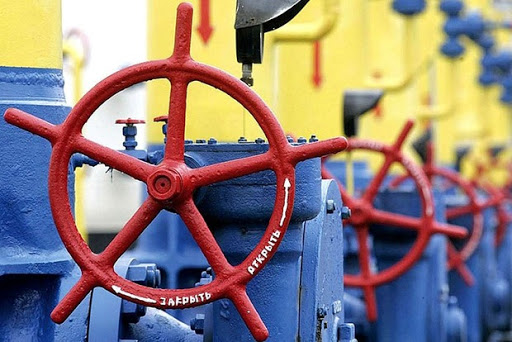 The “tariff crisis” of early 2021 has revealed a number of problems in the Ukrainian energy sector. Experts discussed both the reasonability of wholesale pricing based on import parity and the justifiability of raising the gas distribution tariffs.

In the context of the latter, the ownership of distribution networks again got on the agenda: how much do communities have to pay for gas deliveries via the networks they own? And besides, who owns them, exactly? Communities? The state? Oblgaz companies?

Ukrainian Energy has already found out that answering this question isn’t always easy. Certain amalgamated communities have only begun gathering the archive documents that could prove that a portion of networks is owned by the community. The networks themselves, as a complex technological system, were created by various entities, and most of them not by their operators (oblgaz companies).

At the same time, the situation with state-owned gas pipelines is clearer: in 2017, updated agreements on operation of gas distribution systems were made with certain oblgaz companies, including annexes to these agreements listing the state-owned assets (gas pipelines, gas control points, etc.) transferred to the balance of oblgaz companies and prohibited from alienation (under these agreements). However, most agreements on commercial use of networks are dated back to 2012-2013.

Finally, oblgaz companies are required to report to the regulatory agency, on an annual basis using the report form No 8a, about the ownership structure of the gas pipelines transferred to them, and this information is then published in the NEURC’s annual reports. Moreover, the requirement concerning annual inventorying of state-owned property is set forth in the relevant order of the Energy Ministry. Therefore, changes in the ownership of gas distribution networks can be traced today even in their dynamics.

So, who owns the networks? 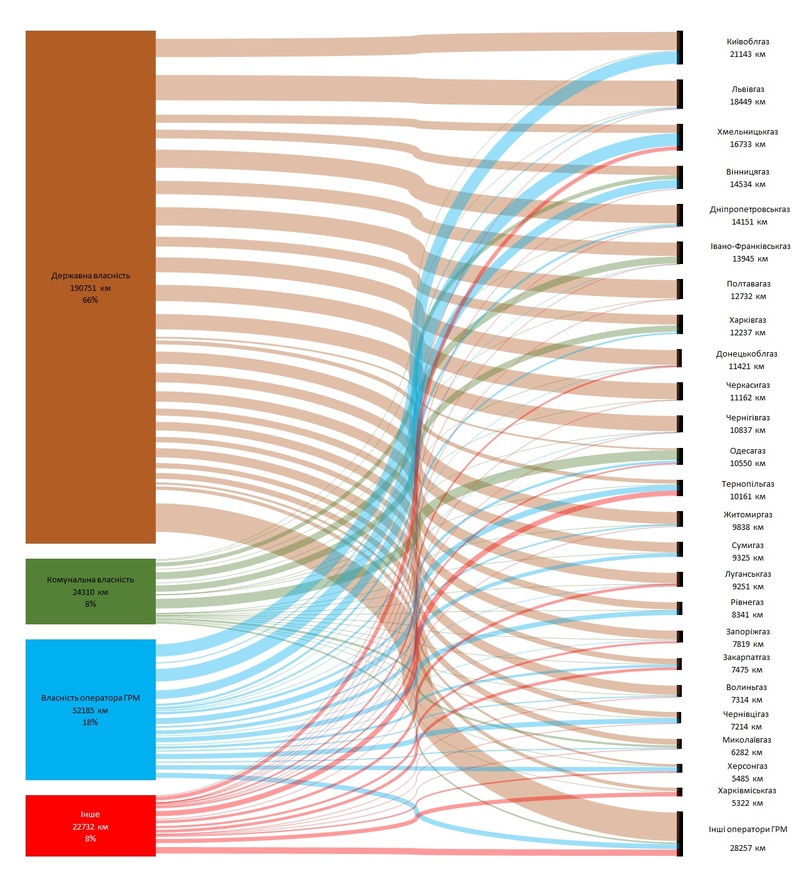 A look at the data itemized by oblgaz companies reveals that these trends are driven by changes in the ownership structure of a small number of gas-DSOs.

There are several other similar oblgaz companies, where the ownership of a significant portion of networks overflew from communities to the gas-DSO:

An especially interesting case concerns the reports by Khersongaz, where in 2017 a large portion of state-owned gas pipelines was first transferred to communities and thence to the gas-DSO. A careful look at the data could suggest that these reports contain a banal error – the figures were simply mixed up. However, it seems that the error wasn’t noticed and wasn’t corrected.

…mass transition of gas pipelines from community to private ownership within certain regions, without any attention from mass media, looks strange, to say at least. Perhaps, there is a “quiet” privatization in the works…

At the same time, according to the Law of Ukraine on Local Self-Government, alienation of community-owned property belongs to the exclusive competence of village, town and city councils and could be approved solely at plenary sessions of the councils concerned. Therefore, verification of information about transition from community to private ownership (or vice versa) necessitates a meticulous work with the minutes of meetings of the local councils concerned, which is yet to be done.

At this point, let’s just note that mass transition of gas pipelines from community to private ownership within certain regions, without any attention from national media, looks strange, to say at least. Perhaps, there is a “quiet” privatization in the works, but on the other hand, the reasons for such drastic changes could be somewhat more prosaic: the data in the NEURC’s annual report for 2019 could simply contain an error: the columns indicating the length of networks owned by communities and by gas-DSOs were mixed up. A comparison of the corresponding figures for 2018-2019 could serve as an indirect proof of this hypothesis.

As we can see, the figures appear to have “traded places”, some of them even with the accuracy of one kilometer (see: oblgaz companies highlighted in bold font). We shall leave it for the reader to decide whether it’s an error in the regulatory agency’s report or indeed the “redistribution” of ownership.

By the way, according to the NEURC’s annual reports the only case when the length of state-owned networks has drastically increased in 2019 concerns Donetskoblgaz (from 6562 to 10,165 km). However, the aggregate length of gas pipelines of all forms of ownership has also increased along with this figure: from 7812 km in 2018 to 11,421 km in 2019. We can assume that the data for 2018 simply did not include the length of gas pipelines in the government-uncontrolled territory, whereas in 2019, it was again included to general indicators.

Nonconformity of data by the NEURC and the Energy Ministry

We also compared the length of state-owned gas distribution networks according to data from the NEURC’s annual reports with the similar indicator obtained from annexes to the agreements on commercial operation of networks between the Energy Ministry and oblgaz companies.

The data from two different sources basically coincides. However, there are certain oblgaz companies in which the actual length of state-owned networks is much smaller than that stated in the commercial operation agreements (it especially concerns Hadiachgaz, Ternopilgaz, Kirovohradgaz, Kremenchukgaz, Mariupolgaz and Khersongaz). At the same time, these agreements state that the property mentioned in the annexes thereto (including gas pipelines) cannot be alienated or privatized.

So, who presently owns the gas pipelines, which according to commercial operation agreements should have been owned by the state? The example of Ternopilgaz was already mentioned: in 2019, the ownership of a large portion of pipelines was transferred to the operator or became categorized as “Other” (if data by the NEURC is correct). As for Hadiachgaz, a portion (445 km) of networks became the property of communities in 2017, and another portion (540 km) became categorized as “Other”.

A detailed story of changes in the ownership structure of distribution networks managed by Kremenchukgaz is shown in the table below.

While in the case of Kremenchukgaz there were almost 1400 km of mysteriously “appearing” networks, Mariupolgaz saw 300 km “disappearing” – most likely, because the most part of the Novoazovsk Raion, which this operator serviced, is presently not controlled by the government. Nevertheless, these 300 km were included to the annex to the commercial operation agreement (which contains data as of 31.01.2020).

A legislative gap could also be the reason for these discrepancies. The NEURC’s data concerning ownership structure is compiled on the basis of data provided by gas-DSOs themselves, whereas information about state-owned assets on file in the relevant register of the State Property Fund and included to commercial operation agreements is provided by gas-DSOs on the basis of inventorying. At the same time, the Law of Ukraine on the State Registration of Proprietary Rights to Immovable Property and Encumbrances Thereupon explicitly indicates that state registration is not required for certain components of gas distribution networks.

Accounting data is needed to audit the condition of networks

An analysis of data suggests a conclusion that even after the “saga” with the updating of commercial operation agreements in 2017 the problem of accounting distribution networks and their ownership structure remains on the agenda. Public authorities and expert community must pay greater attention to this problem, because in order to efficiently manage the available assets (privatize them, provide for lease, concession or free use, etc.), one has to clearly understand which ones of them are owned by the state and communities.

Solution of this problem would indirectly bear upon the transparency of tariffing the gas distribution service.

Moreover, without a quality accounting of assets, the next step, which is important for consumers and the retail gas market, i.e., audit of the condition of distribution networks, will be hard to take. 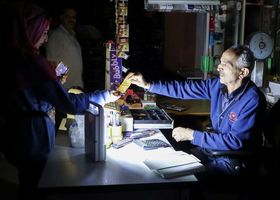