10 steps to knock down the putinist regime in energy sector

Energy is one of the hardest sectors to sanction 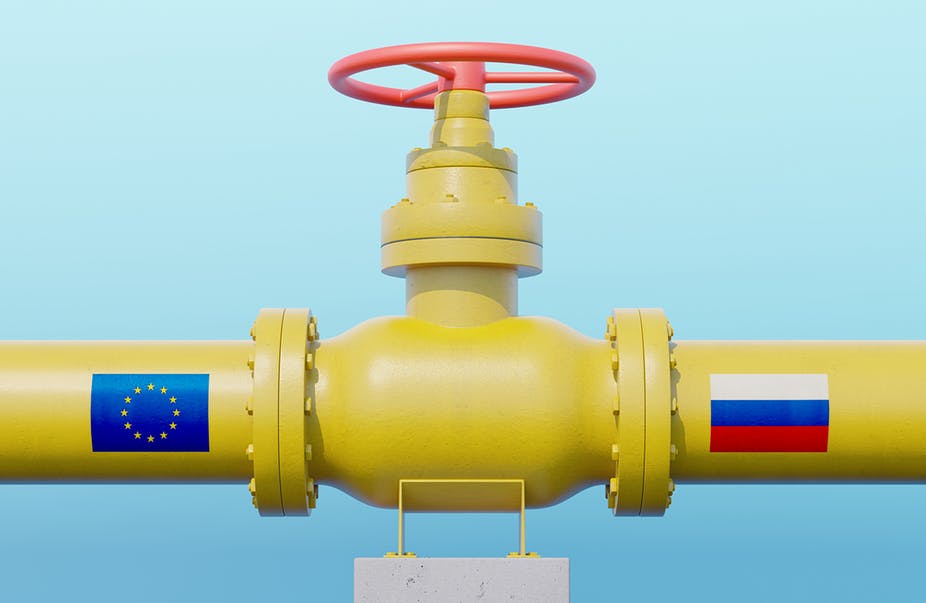 Energy is one of the hardest sectors to sanction. On one hand, Russia is heavily dependent on selling its energy resources, and on the other hand, the decrease of Russian gas supplies will cause the price surge, letting Russia win. Ukrainian experts were calling for years especially on Germany to start a real diversification of sources of energy supply. This was not done. Now the complicated decisions are needed to effectively ban Russia from further use of energy as a weapon against both Ukraine and the EU countries. There is a possibility to limit Russian access to infrastructure, funds, potential new contracts in energy, as well as to the opportunities to continue its propaganda. Below is a detailed explanation. (Download)

1. Oil&gas majors have to continue exiting from Russian projects not to share with Russia new technologies of natural resource development. First companies, including ВР, Shell, Equinor, Exxon, have already started to exit their business with Russia. It is important that other large companies do that. Especially those that currently do not rush into cancelling cooperation or declare mere freeze of investments – such companies as Total, Wintershall, Trafigura and other. It is important to execute pressure also on non-Western companies that own shares in Russian projects – such companies as the Indian ONGC Videsh, the Japanese SODECO, JOGMEC, NEXI, Mitsui, and Mitsubishi.

2. The EU has to take over the management of gas storages in the EU that are currently controlled by Gazprom. This will help not to repeat the situation with their insufficient filling last winter. Gazprom did not fill its storages in 2021 that became one of the reasons for increasing prices in Europe. The situation remains to be critical as of this February, and Russian officials threaten of even higher gas prices for the EU.

3. The EU has to confiscate the assets that belong Russian energy companies, or to transfer them into temporally management by the national concerns. This includes gas pipelines (OPAL, Nord Stream, part of Yamal-Europe), chemical industry facilities, electricity generation, oil refineries. Shares of the Russian companies in their European intermediaries have to be frozen. The example of Moldova shows how Russia easily manipulates its foreign assets to create pressure on public officials in a country.

4. Countries all over the world have to stop cooperation with Rosatom and its subsidiaries. The dependency on Russia in nuclear energy is absolutely the same as the dependency in gas sector. Slovakia started refusing from such cooperation, and it is important for other countries to follow this example. The supplies of Russian uranium also have to be sanctioned.

5. Renowned international PR agencies have to stop cooperation with Russian energy companies, such as Gazprom. Promotion of the Nord Stream 2 construction in Europe is a vivid example of how much money was put by Russian officials into the propaganda, using their energy companies. Support to spreading manipulations has to be stopped.

6. The EU has to make Russia implement the European legislation and grant an access to gas supplies from Central Asian countries. The European Commission has to develop a template contract for energy supplies from Russia in the framework of the Energy Union. That would help it not let Gazprom manipulate each country. Such a template has to include requirement to Russia to work under the European legislation. If such norms will be simultaneously demanded from all EU-based buyers, Russia will have no other option but to agree. The additional factor can be resumption of the antitrust probe by the European Commission into Russian impact on the European gas prices in 2021-2022.

7. The EU member states and the U.S. have to demand more transparent reporting of the Russian energy companies. It is lack of transparency in their operation, as well as ignoring of the ESG (environmental, social, governance) standards, that enabled to pump out millions to prepare war, enrich people in power, spread corruption, unlawfully seize territories of other countries. Public reporting of each license, e.g. based on the EITI standards, has to become an absolute requirement for any dialogue with energy companies. It is not a Russian choice, but rather a mandatory condition.

8. Countries with special conditions of doing business (offshore zones) have to close all offshore companies with Russian final beneficiaries. It is offshores that are a way of hiding Russian money from public control in the “black cash” zone that further supports corruption, unlawful enrichment, as well as wars in other countries. Destruction of Russian offshores will become a signal for other authoritarian countries.

9. Importer countries have to decrease to a zero the priority of buying Russian energy. Not all countries can afford to fully refuse from Russian oil or gas right now. However, all countries can put Russia the last in the list of producers to buy energy from. Payments for oil and gas can be delayed. Considering financial sanctions, even more Western banks refuse to transfer payments. This will not put an additional pressure on the market, but will not let Russia to be fully included into selling oil and gas in the world, as well as receive revenues for the needs of aggressive war.

10. The U.S., the EU, Japan and other countries have to ban banks from providing loans for energy projects in Russia or together with Russian companies, as well as to ban modern technology exports. Any new initiatives or technologies that Russia wants to implement have to be blocked not to create opportunities for Russia to manipulate and bypass sanctions. 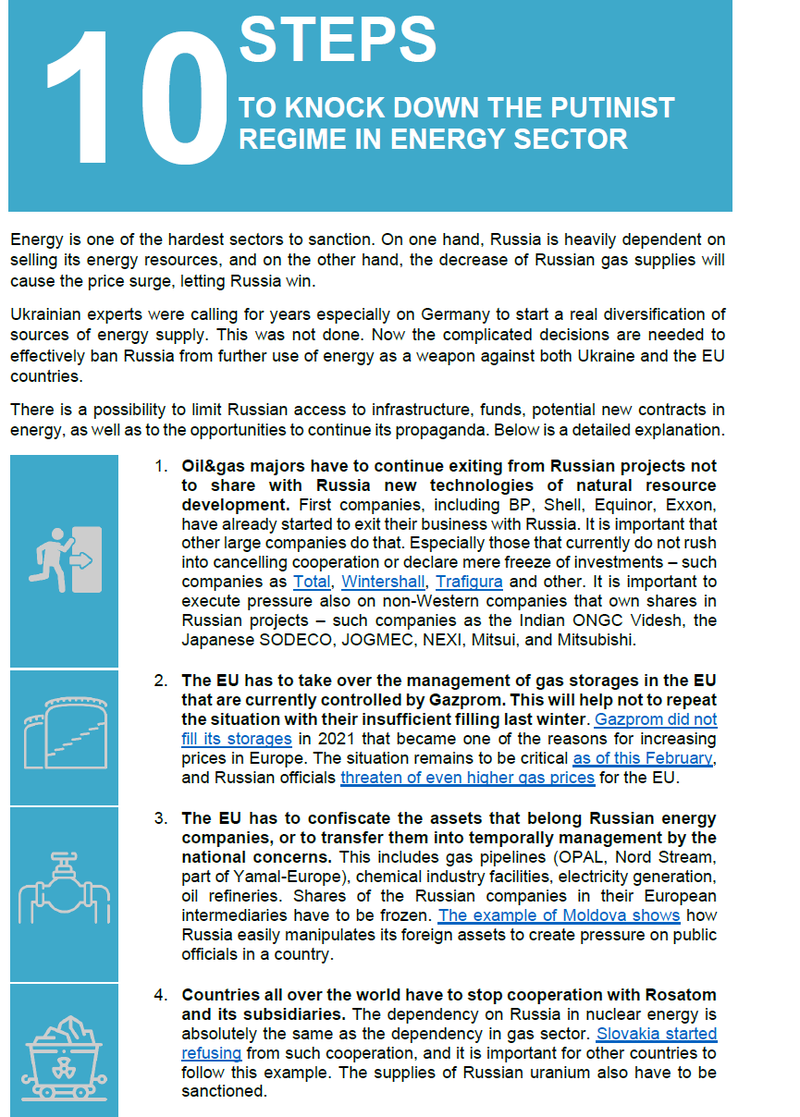 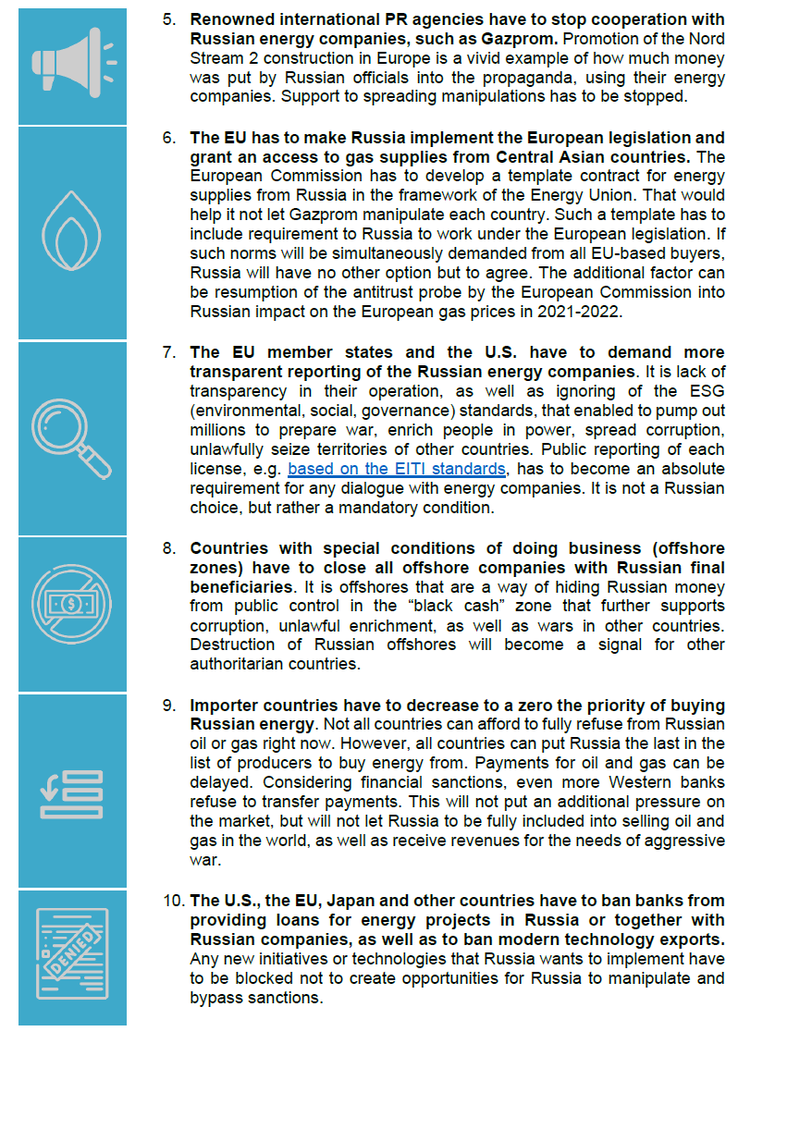