26 May 2021
According to an expert, Russia will not transport gas simultaneously through NS 2 and Ukraine
24 May 2021
Expert: the government is probably not yet ready for fundamental reforms of the PSO in the electricity market
21 May 2021
According to an expert, the public needs the best tools for effective participation in EIA
19 May 2021
Last week, RES produced more electricity than thermal generation for the first time
14 April 2021
A barometer of consumer sentiments in the energy sector in 2018-2020
15 March 2021
Conference “Transparency and Accountability of extractive sector during pandemic and energy transition”
24 February 2021
Experts named the industrial sectors where Ukraine can grow within the Green Deal framework
12 February 2021
Expert: opening the database of benefit recipients would create more preconditions for changing a gas supplier
28 January 2021
Gasotheque: 11 gas suppliers offer February prices below the maximum
27 January 2021
DiXi Group expert: fixing the gas price will produce only a temporary effect
19 January 2021
Pavlenko: horizontal communication between government agencies as regards the European Green Deal becomes critical
16 January 2021
DiXi Group urges improvement of draft laws on the housing and utilities inspectorate
17 December 2020
The International Energy Transparency Index Should Become a Permanent Practice – Experts
04 December 2020
Most of the Adopted Legislative Acts on the Coal Industry has not been Implemented — DiXi Group
03 December 2020
Energy Transparency Index: Energy Sector Information Openness Has Improved
29 November 2020
DiXi Group: Energy Sector in 2021 Should Pay Attention to Three Priorities
13 November 2020
DiXi Group: creation of the Decarbonization Fund is a step in the right direction
All news 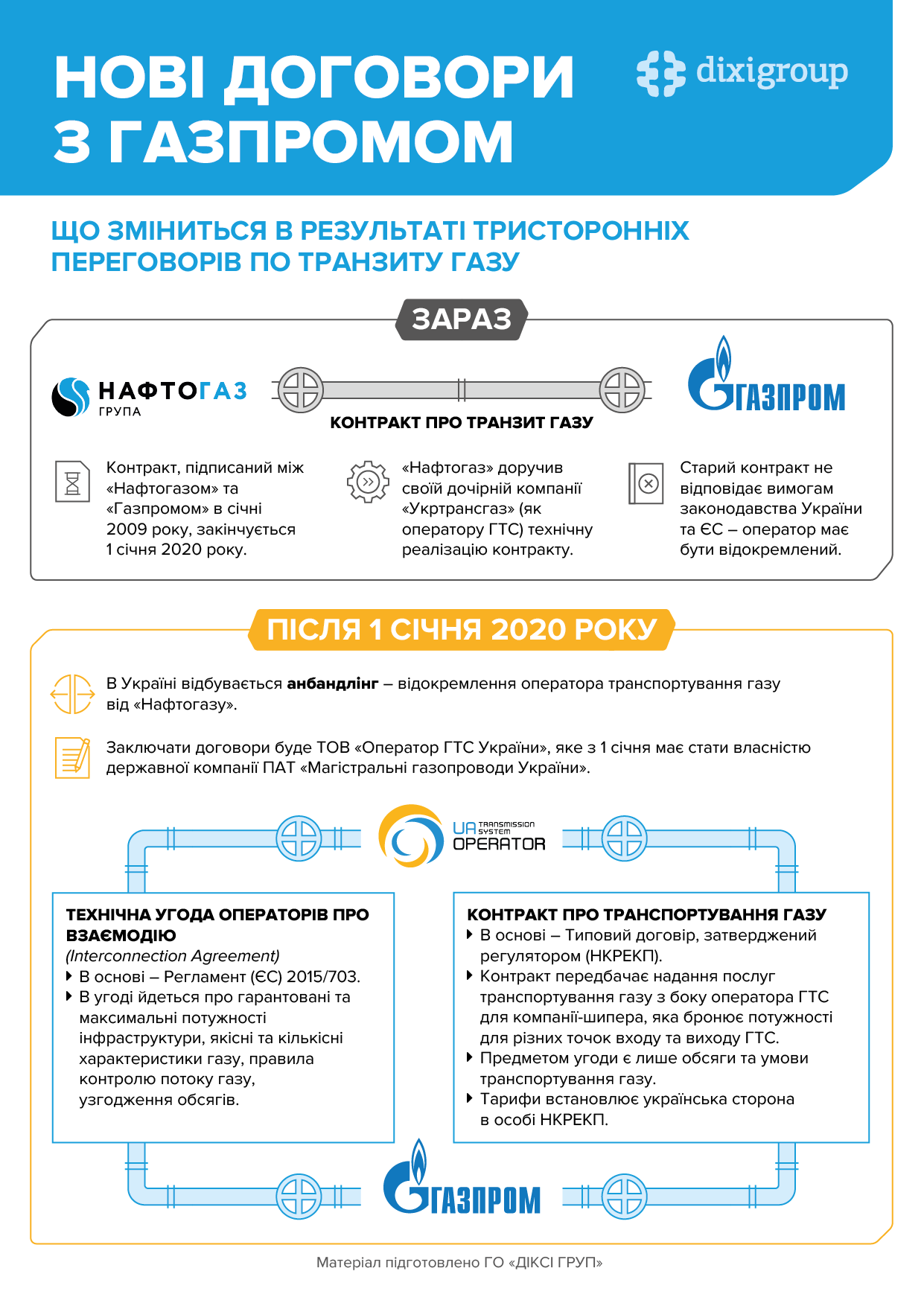 What the trilateral talks are about and what will change 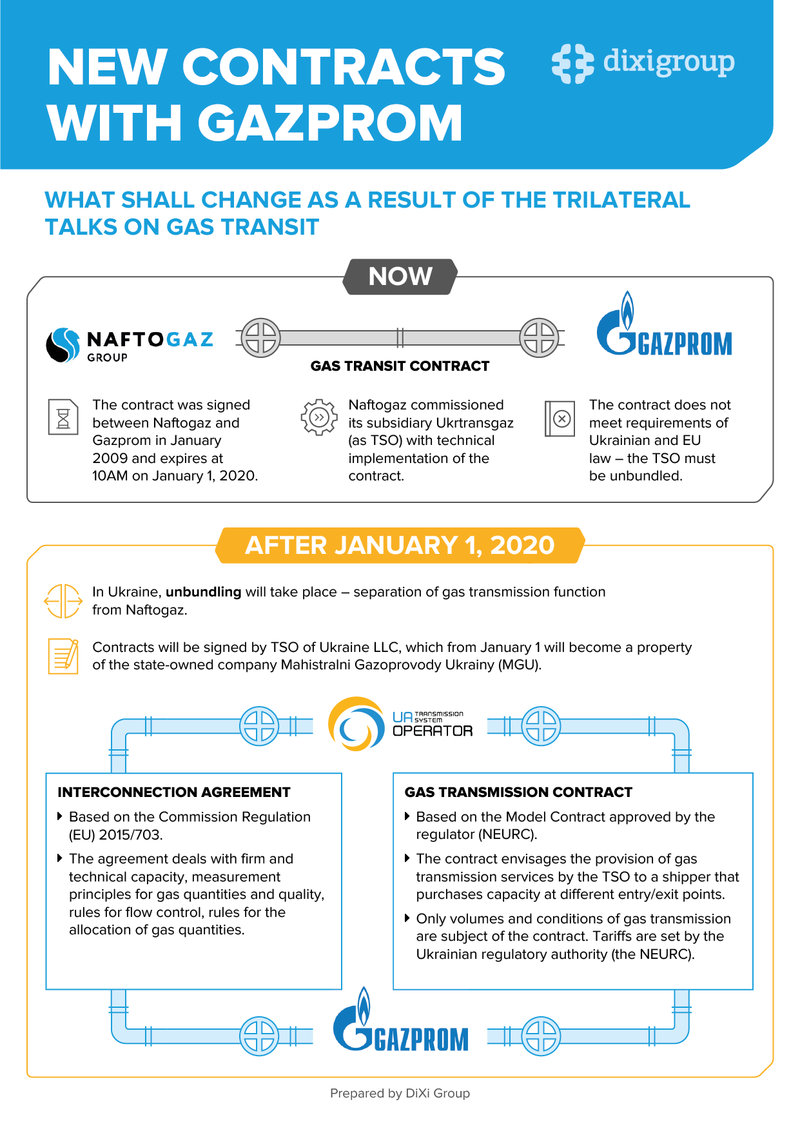 A party to the contract is Naftogaz as vertically integrated company, which has commissioned its subsidiary Ukrtransgaz (TSO) with technical implementation of the contract. The contract does not meet requirements of Ukrainian and EU law – the TSO must be unbundled.

No changes on the Russian side: Gazprom remains both the monopoly pipeline exporter of gas from Russia and the Russian TSO.

In Ukraine, unbundling will take place – a process of legal and operational separation of gas transmission function from Naftogaz. TSO of Ukraine LLC executes technical operation of the system and has to complete certification, to become a subsidiary of the state-owned company Mahistralni Gazoprovody Ukrainy (MGU) from January 1.

New deal with Gazprom should be fixed in two agreements:

Based on the Commission Regulation (EU) 2015/703 establishing a network code on interoperability and data exchange rules.

TSOs of Ukraine and Russia should become the parties to the agreement. Such agreements have already been signed with the TSOs of Poland, Slovakia, Hungary and Romania on most of interconnection points.

Based on the Model Contract for Natural Gas Transmission approved by the regulator (NEURC).

Such contracts are signed with all traders and suppliers using the TSO services (according to NEURC, 373 customers of transmission services operated in the Ukrainian gas market in 2018).

In order to receive transmission services, after concluding the contract, Gazprom must get an EIC code* and a shipper code** in the TSO electronic database, receive access to its Information Platform, register a periodic customs declaration and a shipper pair, make payment for the capacity and submit a nomination.

* Energy Identification Code of natural gas market player and/or commercial metering point, defined under the rules of the European Network of Transmission System Operators for Gas (ENTSOG), for the purposes of unification and identification, including for the purposes of participation in international gas markets and to ensure simplification of supplier switching and data exchange

** alphanumeric identifier of the customer of transmission services, used in messages during matching of nominations; also identifies gas owner at cross-border interconnections

Prepared by DiXi Group think tank based on data from media, Ukrtransgaz, NEURC and Director of TSO of Ukraine LLC Sergiy Makogon.

Interview
Olena Pavlenko: the environmental component of NS 2 may become an argument for restraining the project
25 May 2021