A DiXi Group expert: cooperation between the public and the government increases trust in gas production operations

The government declared the intention not to prolong the Regulation on Placing Special Obligations (PSO) in the gas market, which regulates prices for households and heat generating companies. What it means for consumers is the potential opening of a "gas supermarket" of suppliers.

The National Energy and Utilities Regulatory Commission simplified the procedure of changing gas supplier for consumers, but failed to completely regulate the issue of overdue bills owed by a consumer to the old supplier, DiXi Group external analyst Serhii Yevtushok said when commenting on the draft resolution of the NEURC.

“It remains unclear how the procedure of changing supplier would take place if a consumer has overdue bills owed to the existing supplier. On the one hand, consumers will no longer have to procure a written reference confirming the absence of overdue payments or a statement of cross-verification of bill payments, and that’s a big “plus”. On the other hand, a consumer would not be able to change a supplier until arranging a debt repayment schedule. This point is especially important in view of the fact that gazzbut companies continue to include charges based on “temperature coefficients” to gas bills, despite negative reaction from the regulator and the government. This situation provides room for manipulations on part of existing suppliers, which do not want to lose consumers,” the expert believes.

He also outlined the advantages of the resolution proposed by the Commission:

● Firstly, to change a supplier, all a consumer needs to do is to submit an application for accession to another gas supplier, and the latter must register it in information system of the gas TSO within three days. The procedure of changing supplier starts on that very moment, and it takes place solely in the information system: for example, the existing supplier automatically receives a notice that its consumer wants to change the supplier.

● Secondly, the procedure of changing supplier must be completed within 21 days after submitting an application for accession to the natural gas supply agreement. If the document package provided by a consumer is sufficient and the application does not need to be clarified, the new supplier will file the consumer in its register of consumers, and the next day, will start supplying gas to that consumer.

● Thirdly, a consumer cannot change the existing supplier until all outstanding bills payable to that supplier are settled. The arrangement of a debt restructuring schedule is now also regarded as this step. Only after this step would a consumer be able to submit an application for accession, but the new supplier has the right to decline it if the consumer has overdue bills owed to any of the previous suppliers in past periods.

● Fourthly, the new procedure retains suppliers with special obligations, which cannot decline a gas supply agreement to a household consumer. In other words, even in the conditions of market prices, gazzbut (gas supply) companies attain the status of “guaranteed” suppliers of gas to households.

“Overall, the proposed procedure looks quite advantageous for private consumers. However, organization of an information campaign explaining the future innovations is an important point. The broad public must be explained in advance why change gas suppliers at all, what benefits it brings, and also, what “pitfalls” they should be wary of. For a strong consumer is, first of all, the one who knows their rights and opportunities, the one who won’t get lost in the new gas “supermarket”,” the expert believes.

He reminded that the gas market for private households in Ukraine is due to become operational on 1 May, and therefore, the NEURC prepared a draft resolution simplifying the procedure of changing supplier.

“The government declared the intention not to prolong the Regulation on Placing Special Obligations (PSO) in the gas market, which regulates prices for households and heat generating companies… The possibility to choose among competing offers and a simple procedure of changing supplier is an important element of any free commodity market. Let’s imagine a “supermarket” where a shopper can choose among dozens of product items and hundreds of commercial offers,” Mr. Yevtushok said.

That’s how, in his words, electricity and gas markets work in the EU.

“There are even websites which aggregate offers from many suppliers,” the expert added.

Similar
А plan for requalification of coal miners must be ready as soon as this year — Olena Pavlenko
25 February 2020
Russia must find itself without international markets for energy resources - expert
04 May 2022
For integration into the EU, “green” trends must be a priority: experts
26 May 2020
Energy Transparency Index: Energy Sector Information Openness Has Improved
03 December 2020
Popular: 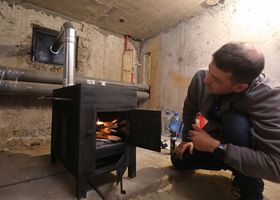