Ukrainians are concerned the most about the tariffs and quality of energy supply services: what exactly should the government and businesses pay attention to? 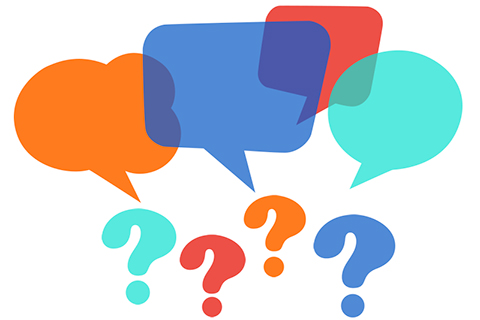 Public surveys reveal that consumers became more informed, yet they remain critical about the price and quality of gas, heat, and electricity supply services. The activity of consumers is directed less and less at the protection of their rights, and more and more at taking advantage of the opening markets. What conclusions can the government and supplier companies draw from the survey data?

What are the most painful issues?

In late 2020, sociologists held a survey ordered by DiXi Group as part of the Energy Sector Transparency project, and information gathered by this survey was compared with the results of a similar survey held two years ago.

The survey has revealed that Ukrainians became more informed about the energy sector compared to 2018. In particular, 15 pp more respondents know how much energy they consume (73% of respondents), 13 pp more of them are familiar with prices/tariffs and saving methods (61% and 51%, respectively), and the number of those knowledgeable of subsidies has increased by 11 pp (up to 54%) as of the end of 2020.

As before, the most painful issues are the quality and price of services. According to the survey data, consumers are interested the most in information about the quality and tariffing of energy supply services (more than half of respondents). 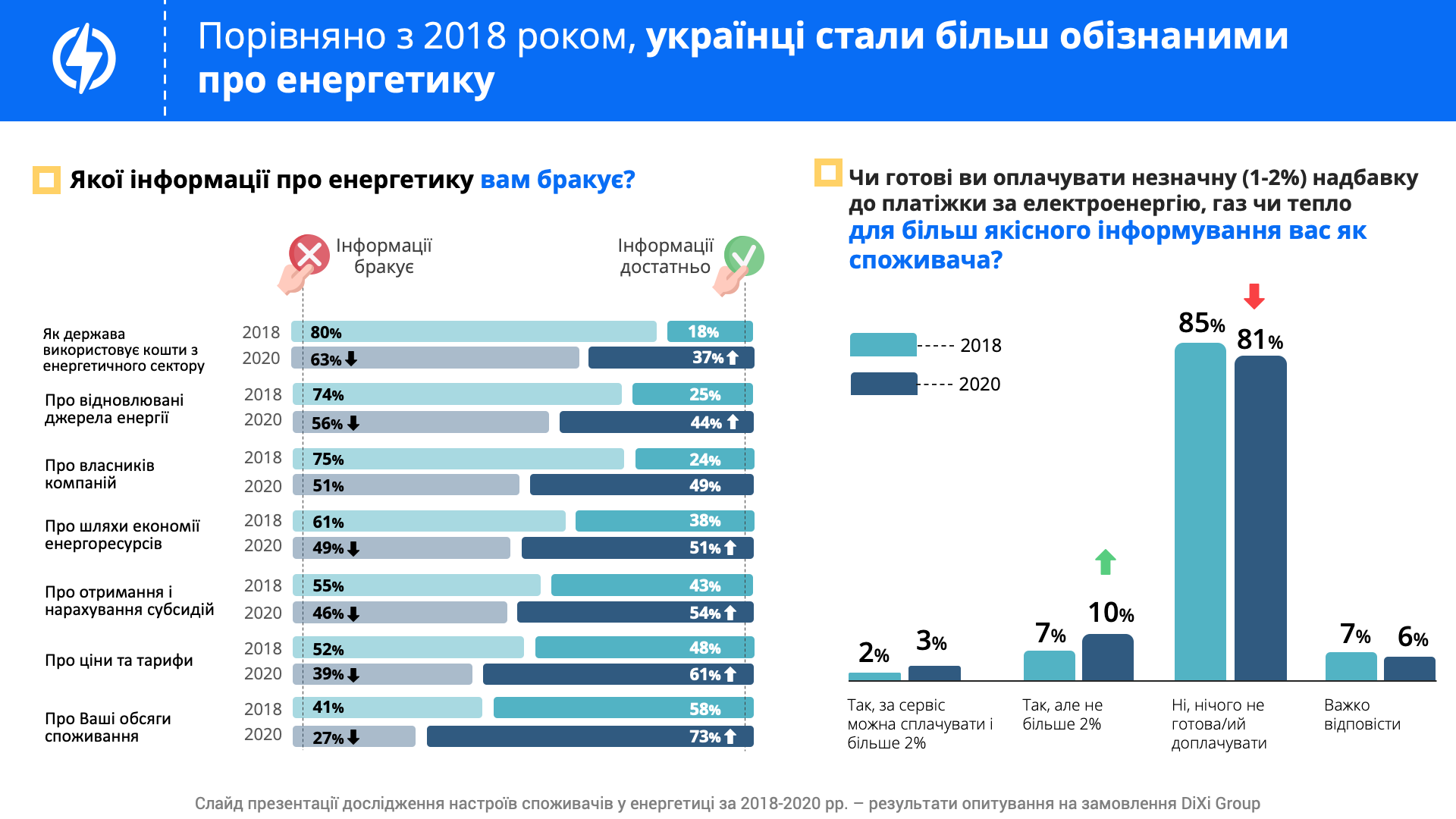 Like in 2018, almost 80% of respondents believe that tariffs are “corrupt”. How are Ukrainians prepared to react to that? The majority (55%) of respondents are prepared to participate in discussions with friends and other persons they know. The percentage of those ready to sign petitions has increased to 39% in 2020. It is worth noting that the percentage of citizens who could take to the streets for protest rallies and demonstrations has declined from 23% to 19%, and 69% of respondents are not prepared to participate in active protest campaigns (versus 63% in 2018).

Do consumers receive a response to their complaints?

No positive trend can be seen comparing to 2018. According to respondents, only two out of every five complaints about gas supply were resolved. The same is true about the half of complaints concerning electricity supply (49%). In this regard, the number of those who have experience in lodging complaints about the quality of gas and electricity supply services has declined in 2020 (8% and 9%, respectively). Consumers were more active in complaining about the quality of heat supply, but nevertheless, the percentage of people who lodged complaints has also declined in 2020, down to 14%. At the same time, the resolution rate of these complaints has increased over the two years, from 25% to 48%. 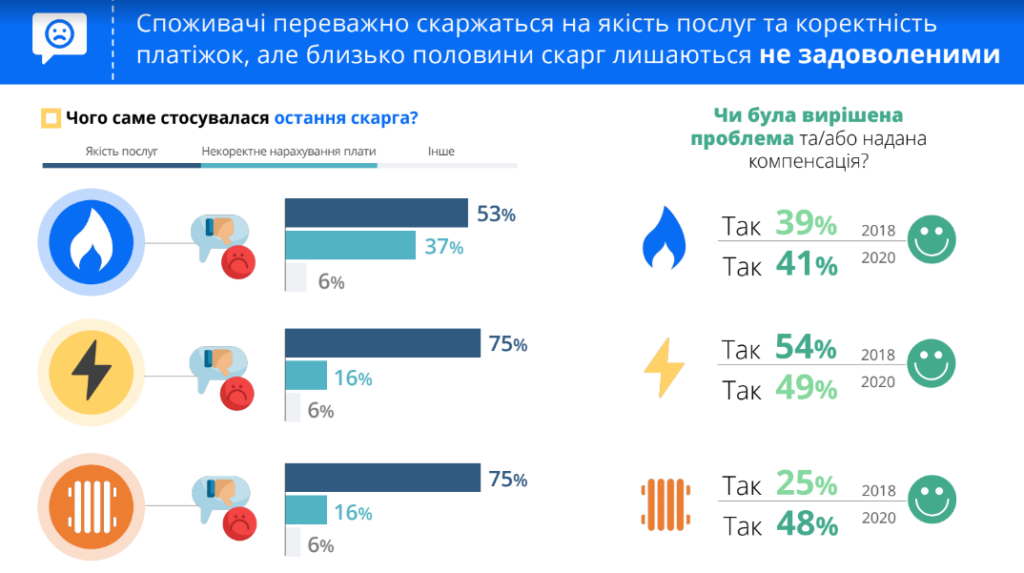 More than half of complaints are lodged with the supplier companies, and every fourth complaint is sent to the local authorities or the managing company.

Are they ready to change a supplier?

Last year, consumers became able, for the first time, to change the energy service provider company, in particular, in the natural gas market. This survey has revealed a new market phenomenon: approximately every third respondent said that they are ready to change the electricity or gas supplier. The main reason is the desire to save on bills (71%). 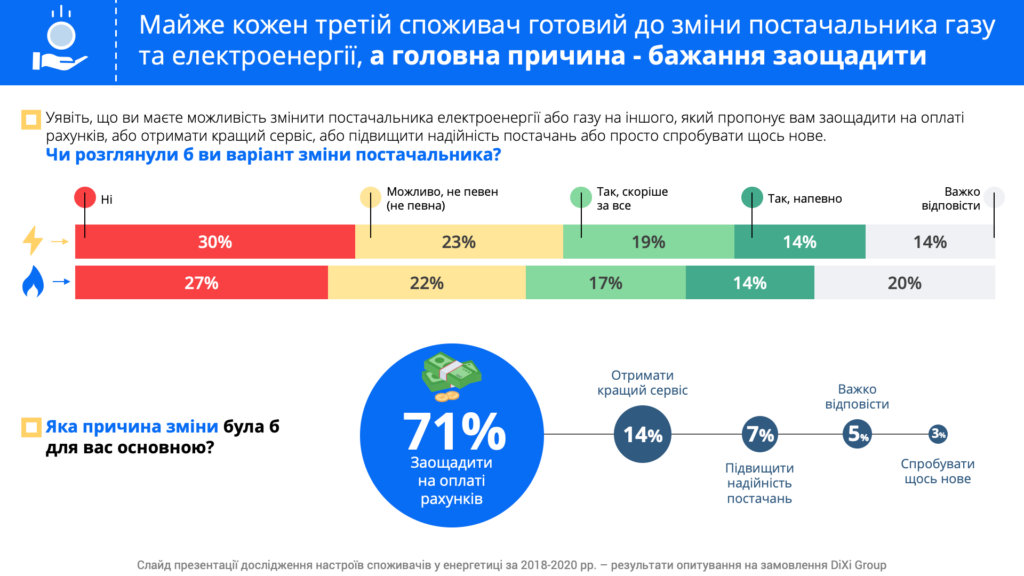 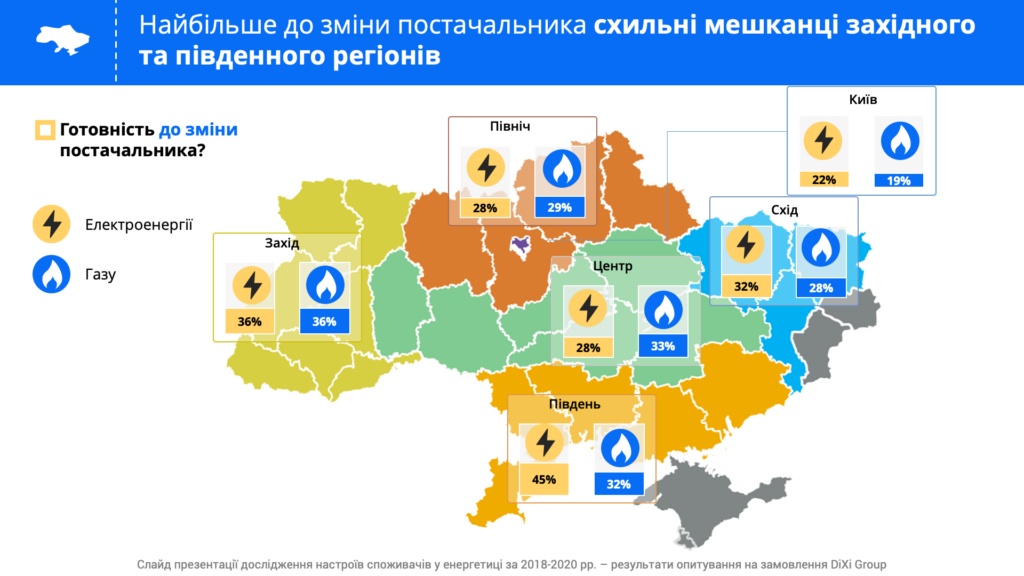 “Energy markets in Ukraine are only emerging and are still immature, and consumers are only learning how to behave in new market conditions. Therefore, it is critically important today to help them better understand the markets, become more aware of their rights and the methods of exercising and protecting them. In addition, it is important to create instruments that could help them gradually become more active market participants and display mature market behavior. In particular, EU states develop online price comparison tools and supplier ratings, which help consumers better navigate the market and make a more informed and prudent choice of supplier,” DiXi Group expert Bohdan Serebrennikov said.

It is worth reminding that in order to enhance consumers and competitive markets, DiXi Group has already launched a pilot rating of electricity suppliers and the gas price comparison tool Gasotheque, and is currently working on a rating of gas suppliers.

How to stay in touch with consumers?

The overwhelming majority (81%) of respondents are not ready to pay a small surcharge on electricity, gas or heating bills to receive better-quality information, while 10% of respondents are prepared to pay more, but not more than 2% of the bill amount. The majority of those ready to pay more for better information are young people (20% in the age group of 25-34 years) and residents of Kyiv (17%).

What form of payment do Ukrainian consumers choose? Almost every two out of three respondents pay their utility bills over the counter. Only every third respondent pays the bills online, most often using online services. The largest number of those using websites of utility companies lives in Kyiv: 57%. 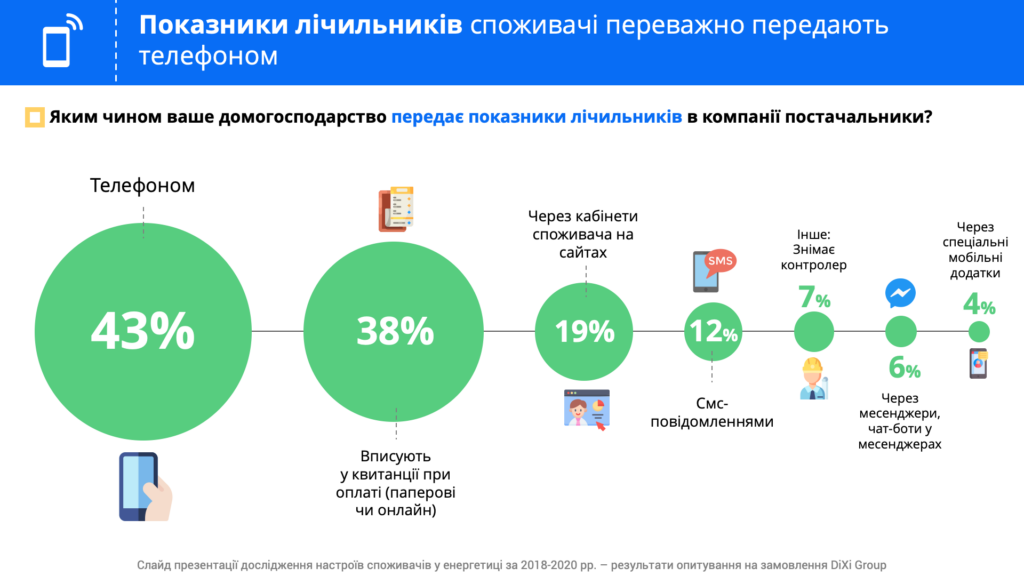 Almost every other household (43%) reports meter readings over the telephone, followed by filling out payment receipts (paper or online) (38%); the third most popular method is using customer accounts (19%).

What should the government take care about?

For the half of respondents, “energy policy of Ukraine” means establishing more competitive prices for consumers. Minimizing the risks of interruptions in energy supply and energy shortages, and reduction of energy consumption in the country are, in the opinion of respondents, the objectives of lesser priority (46% and 44%, respectively). Region-wise, the priority of “competitive prices” received more support in the North (58%), and “reduction of consumption” in Kyiv (49%).

The majority (almost 80%) of respondents believe that Ukraine must provide access to clean energy, and that the government should encourage investments in renewable energy sources. However, that very majority has no idea how the “green” energy is priced (86%), and is not ready to pay more for it (almost 80%). Among those who are ready to pay more (15%), two out of three agree to a certain surcharge, but not exceeding 5% of the “regular price”.

“It is an interesting fact that only 37% of Ukrainians – unlike the 54% of EU citizens – agree that prices must be competitive and market-regulated, while the percentage of citizens unable to pay energy bills has declined, thanks to targeted subsidies, participation in energy efficiency improvement programs, etc. It probably indicates that Ukrainians are not ready for market pricing yet, relying more on government regulation of prices. In these conditions, raising consumer awareness of the advantages and opportunities of market pricing, of the available methods of saving on energy bills and the system of protecting vulnerable consumers must become one of the important areas of national policy,” Bohdan Serebrennikov said.

The survey was conducted in November-December 2020 by Info Sapiens. The respondents were chosen from among the adult population of Ukraine aged 18 years and older, living in all regions of Ukraine except the territories not controlled by the Ukrainian government. The sample included 3723 respondents. The maximum sampling error is 1.6%. The surveying was held using the computer-assisted personal interviewing (СAPI) method.

This study was made possible thanks to the support of the American People, provided through the United States Agency for International Development (USAID) within the framework of the Energy Sector Transparency implemented by NGO DiXi Group. The content is the sole responsibility of DiXi Group, and it does not necessarily reflect the views of USAID or the United States Government. 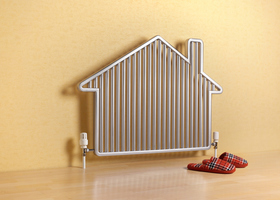